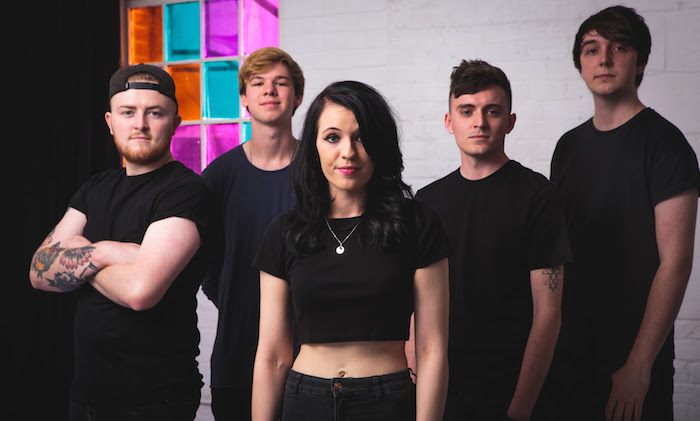 “We stand by it as the best song we’ve written”, declares Crossing The Limits vocalist Rachael Holland of their new video single Reverse. She continues: “The song talks about going through the aftermath of a break up. I was completely broken over this person, and long after it was over I would torture myself by replaying it all in my head. Writing this song helped me come to terms with moving on, and finding some peace of mind. I hope this song can help someone else get through it too.”

Shot in Great Yarmouth and featuring a performance in a dark and gloomy barn, you can see Reverse here. The track appears on the newcomers’ debut EP Perseverance, which will be self-released on 6 April 2018.

Completed by Tom Colmans and Dan Smith on guitar, Tim Clements on bass and Ben Brennan on drums, Crossing The Limits came together thanks to ‘the internet’, with Holland recalling: “I’d just gotten out of another band I’d been in for a few years, but it had reached a point where we weren’t all on the same page anymore. I felt pretty disheartened but I knew that I wasn’t done. I began searching online for members to start a new band with, who were all committed and driven. Our ambition is for our music to uplift people and inspire them to be who they are.”

With the line-up complete, the members set about writing material, drawing upon lessons they had learned over the past year. Not all of the songs made the cut, but after four months the band had the material that would become the record, as Holland confirms: “Its about walking through the storm. Life gets rough, but you have to keep going. You can’t just sit there in your rut and give up, you have to persevere through set backs to grow”.

Recorded at Steel City Studios with Drew Lawson and mastered by Grant Berry at Fader, Holland fondly recalls: “Staying in a budget hotel, living off of fast food and being around each other all the time brought us all closer together, and we really got to know each other and how to agree to disagree sometimes. These guys are my best friends, and the support we give each other is amazing, they’re my brothers.”

Naming Neck Deep, Tonight Alive, State Champs and Against The Current amongst their influences, on Perseverance Crossing The Limits offer up a delightfully energetic and uplifting dose of posi-pop-punk. Holland concludes: “There aren’t enough female fronted bands out there right now, we can bring it just as much as any male fronted band. We’re coming full force.”