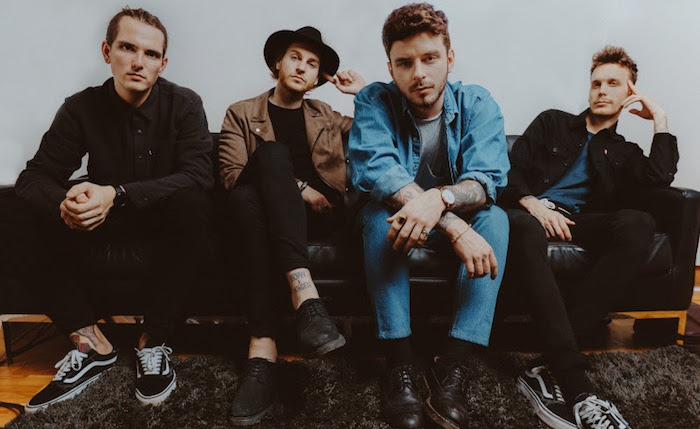 Swedish rockers Normandie have just signed to Easy Life Records and released the Gold Edition of their album Inguz.

Easy life are the label that’s home to Lower Than Atlantis, Arcane Roots, Waterparks and more, and now they’ve welcomed the four Swedes into their roster.

After a huge response following the release of their debut album Inguz, Normandie have now released an extended edition of the critically acclaimed record. Inguz – Gold Edition features the original album tracks, follow up singles Ghost and Pay For This as well as alternative tracks that were recorded at Soundtrade Studios.

Guitarist Håkan chatted to us about their new record label, playing in the UK and the reworked versions on Inguz Gold Edition.

Congratulations on the new record deal! How do you feel about it?

Thank you! It feels super! We’ve been looking for the right label for a very long time, and when we had our first meeting with Easy Life it simply felt like a perfect match.

Last week you released an extended version of your record Inguz which features a few alternative tracks – tell us a little bit more about the additional songs!

We wanted to celebrate two years of Inguz with something special, so we wrote two stripped versions of Believe and Collide. We also recorded a live session at Soundtrade Studios here in Stockholm and decided to make a stripped live version of Collide to catch the right feelings, together with full band versions of Ghost and Awakening. Ghost is a track we released after the album, and shortly after that we released Pay For This. Both the songs are included on the Gold Edition of Inguz aswell.

The acoustic version of “Collide” is absolutely beautiful – have you ever thought about recording a completely stripped back album?

We’ve never talked about writing a completely stripped back album actually… would you like that? (editor’s note: yes, we definitely do!!)

You’ve toured the UK with William Ryan Key from Yellowcard late last year – what do you love about playing in the UK?

We’ve toured a lot in the UK the past two years, and it’s an energy there that we haven’t experienced in any other country. As a mega bonus the people are super nice as well! Can’t wait to be back.

For anyone who hasn’t seen you live, how would you describe your live shows?

I would say mighty, energic and really, really fun!

What are the three essential things you need to have with you on tour?

For me personally It’s definitely my shades, a bottle of Jameson and my tour slippers. When I have these things I’m ready for the longest bus drive on earth!

You’re also playing at Reading & Leeds festival this summer! How excited are you for that?

Oh my, SO stoked about playing Reading & Leeds! I’ve been watching live videos from both the festivals for as long as I can remember, with a dream to play there someday. High five, teenage me!

What do you love about playing festivals compared to your own headline shows?

The whole atmosphere on a festival is indescribable! The air is filled with love and joy. The feeling about playing a stage outside in the summer, with happy people around you is just amazing.

What else does 2018 have in store for you? Can we expect you back in the UK?

We’ll be releasing our second album this year, which is SUPER exciting! A new album means a lot of touring as well, and UK is definitely included!