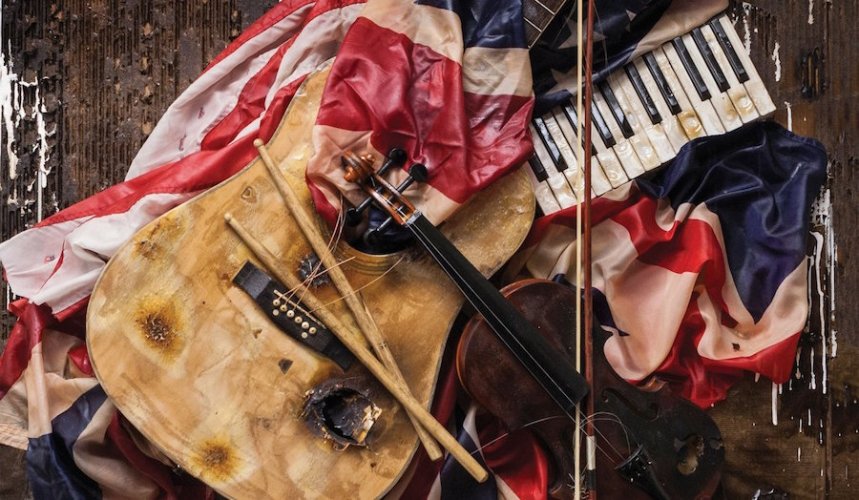 On Restoration, the songs of British music icon Elton John get a Nashville make-over.

Restoration, out now via Universal Music Nashville, is a celebration of the extraordinary songwriting partnership of Sir Elton John and Bernie Taupin. It brings together big names in the country music scene including Little Big Town, Chris Stapleton and Dolly Parton as well as pop-star Miley Cyrus.

The record shows Elton John’s genre and generation crossing appeal by having old and new country musicians re-interpret pieces from a fifty year writing partnership. About the record Elton John says “It’s always a huge compliment when an artist loves your song enough to take the time and effort to rework it. As songwriters, Bernie and myself are thrilled when singers we admire and respect as much as those on Revamp choose to add their own unique twist in the process. It means that our music is still relevant and ultimately that our songs continue to reach new audiences. We’re humbled and thank them all for their generosity.”

If you took a list of most covered artists there’s a good chance it would be lead by Elton John, with good reason. Over the past fifty years, the songwriter has shaped pop music as we know it. He’s broken through barriers, soothed the entire planet mourning the loss of Princess Diana with just one song and he’s written the soundtrack to one of the most loved Disney movies of all time.

But covers are always a hit and miss. Especially when it’s icons like Elvis, Johnny Cash or Elton John. They are usually one of two things, and those two things only: a) an offense to the original artist and their work or b) a stunning tribute. Most covers, let’s be honest, can be found in the former category. However, on Restoration, these covers belong to the latter.

Kicking off with a gorgeous and huge cover of the legendary Rocket Man, off of Elton’s 1972 album Honkey Chateau, Little Big Town play to their strength with killer harmonies and a little twist. The radio waves you hear in the harmonies of the song were actually recorded from the 2011 NASA Mission Juno to explore Jupiter. How awesome is that?! The band played this cover at their 2018 set at Country To Country festival at London’s O2 arena, so hearing it on record, it packs just as much of a punch.

Another beaut on the record is Brothers Osborne’s version of 1970’s Take Me To The Pilot. The duo absolutely nails the conversion of Elton John’s pop and soul infused 70’s track to a contemporary country rock tune. John Osborne says about the guitar take on EJ’s piano composition: “Elton kind of plays like a guitar player. He’s really agressive. He can do finesse, but he also has a lot of grip when he plays, and that’s my kind of style as a guitar player. So it was actually really easy to transition into that.”

One of the absolute stand-out tracks of the album is Chris Stapleton’s reimagined I Want Love. Originally recorded on Elton John’s 2001 Songs From The West Coast. It’s one of the tracks that is closest to its source, and Stapleton’s voice has a hint of Elton John in it as well, so much so that it really makes you want to hear this as a live duet. About his involvement Stapleton said “At any stage of life you can pick out a moment and a place in time, things that were going on and there’s an Elton John song playing in the background. He’s always going to be present in every musician’s mind and mine as well because his music reaches that far.”

What is great about Restoration is that all artists add their own sound to the covers. Kacey Musgraves’ Roy Rogers is the perfect example of this. The singer’s signature slide guitar sounds and her vocal harmonies instantly tie back to her recently released album Golden Hour while still keeping the spirit of Elton John alive and well.

The album finishes off with some of the biggest legends in country music. Roseanne Cash and Emmylou Harris took on one of Elton John’s biggest hits since the turn of the century with This Train Don’t Stop Here Anymore. The two Nashville ladies take a ballad and add their own classic country music twist to it, turning it into something that could have been a country hit in the first place. And Willie Nelson signs off the album with an iconic rendition of  Border Song. Released in 1970, the song has previously also been covered by Aretha Franklin and Eric Clapton.

Fact is, if you like country music and you like Elton John (although, are there people who genuinely don’t like Elton John?), you’ll love this album. There’s also a pop counter part to this record. Revamp features the likes of Lady Gaga, Ed Sheeran and Coldplay, and is quite the treat as well.