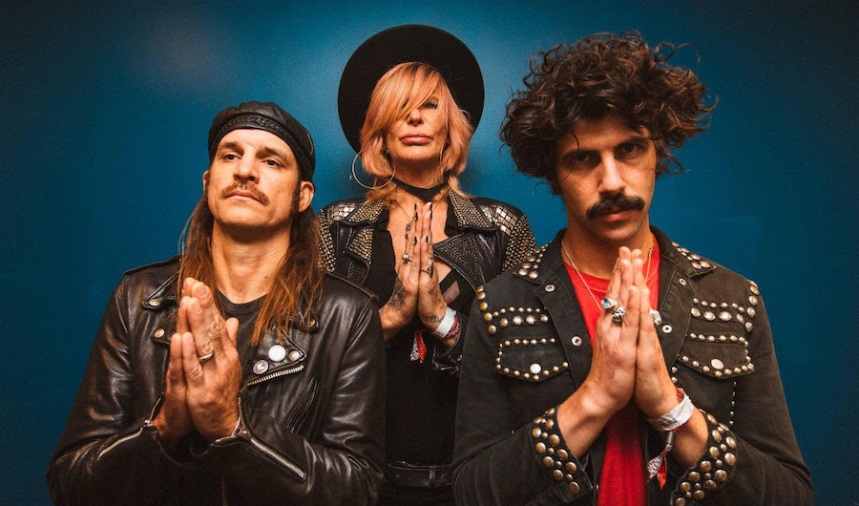 The band’s new EP with the same title is out now.

Currently demolishing venues across Europe, The Shrine release the highly flammable video for Cruel World, taken from their recently released EP Cruel World, four songs of filthy groove that send a nod to both ZZ & Sabbath while attacking the atrocities of the modern age.

On this new EP, the Venice, California rockers have grown heavier and simpler in a primitive yet defiant way. The Shrine come across more aware and in control of their power, mixing their favourite 70’s & 80’s jams in a fresh way that you don’t quite hear in today’s digital landscape. Cruel World was mixed at Henson Studios by Tom Syrowski (who won a Grammy in 2018 for his work with Mastodon).

From their warehouse skate parties and guitar shop beginnings in Venice, California to their Ozzfest appearances, support slots with Slayer, Ghost, Dinosaur Jr. and repeat headline Japanese and Australian tours, The Shrine have thrived in the cemetery that is the music industry. On top of an official deck with Dogtown Skateboards, a signature shoe with Converse, and their debut TV performance on Norman Reedus’ Ride show on AMC; their last album cover was illustrated by Shepard Fairey. The world-renowned street artist is a Shrine fan who hand-picked the band to headline his Damaged art show in Los Angeles to 8000.

“The things that attracted me to skateboarding, punk, and metal in the ’80s were their complete rejection of mainstream conformity and their embrace of aggression, rebellion, and do-it-yourselfing ripped to shreds danced on the razor’s edge. As subcultures became accepted and co-opted over the years, I craved music and a scene with the raw intensity of Black Flag, Black Sabbath, Suicidal Tendencies, Motorhead, the Circle Jerks, etc.. When I discovered The Shrine I realized that the kind of feral, sleazy, high-octane, fun as hell band and scene that I was looking for was out there, not in their 50’s, but in their 20’s.”

“The warehouse record release party for The Shrine’s Rare Breed was the most awesome steaming pile of sweaty, surly, rock gods and goddesses in denim and leather I’ve been to in years! There were more kick-ass rock and skate t-shirts in that room than I’d seen in the last five years in Echo Park and Silver Lake combined. I’ve seen a lot of great shows in my life, but to have that particular crowd pogoing and stage diving to The Shrine with Nik Turner from Hawkwind on stage improvising psychedelic punk saxophone was pretty surreal. Someone dove on my head and sprained my neck at one point but I was so hopped up on adrenaline that I didn’t feel it much until the next day. So yeah, I guess I could say the Shrine shred and I think they’re OK.” says Shepard Fairey.

The Shrine had an insane release party on April 19th in Los Angeles and then they take off to Europe with their new bass player Corey Parks (Nashville Pussy, Chelsea Girls, Revolver Magazine’s 50 Hottest Chicks of Metal). “We had jammed with Corey before on a Motorhead cover, and she actually took me to hang out with Lemmy in the studio during their final album.” says frontman Josh Landau “There isn’t anyone else we could imagine doing The Shrine with other than Corey now. She brings a touch of class, charisma, and fire to the stage that pushes our chemistry into a whole new epic realm.”