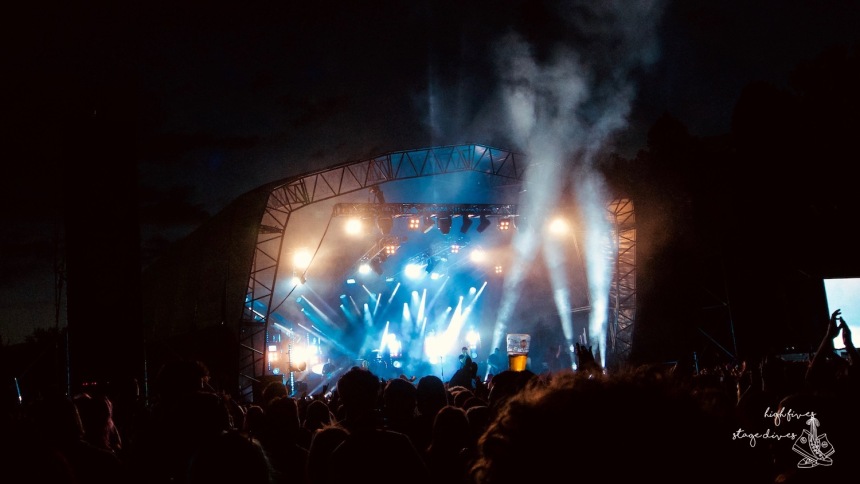 The best weekend of the year was their biggest one yet and a full on fest for the ears.

You may or may not be aware that one of our bug bears is people saying rock is dead. Well if you’ve been to Slam Dunk Festival this weekend, you’ll know this is far from true.

2019 marked the biggest year to date for the festival as it was fully outdoors on both the North and South sites. With two arena-sized headliners All Time Low and Bullet For My Valentine, Slam Dunk wasn’t playing games with this year’s line-up. Bringing you the very best of punk, emo, hard rock and pop-punk, it shines a bright light on the growing alternative scene and the immense talent within it.

On Sunday the weather gods were just about on our side with only a few drizzles here and there. It never rained long enough to get too soaked (Let’s face it, this is England so that’s all we can ask for). And in a wonderful turn of events, a double rainbow appeared above the site just before the headliners took to the stage – if you’re religious, you might say God loves punk (of course he does!).

There wasn’t a single band on the day that disappointed. We kicked things off with the talented bunch in Milk Teeth who opened the Dickies Stage. One fab thing to mention about this year’s Slammy D is the three double stages – what a brilliant idea. The Key stages, Dickies/Marshall stages and Impericon/Jägermeister stages were set up to be right next to each other or in the same tent and presented acts on one stage back to back. So you spend the entire day at one of these stage duos and never be without music.

It was a big weekend for the main stage as well as Boston Manor and As It Is rocked it for the first time. As It Is have been a resident Slam Dunk band for years. Now their impressive last record The Great Depression propelled them onto the main stage. An honour they well and truly paid respect to with a killer set, including a very heavy performance of their recently released reimagined version of their latest album.

For all the punks, the Punk In Drublic stage was an absolute treat with Anti-Flag, Bad Religion and NOFX. And just next to it the always gorgeous Acoustic Stage with Rob Lynch, John Floreani and more was the most chill spot at the entire festival. And let’s not forget the surprise set from pop rock icons Busted!

As the sun slowly set over Hatfield House, Pennsylvania punk rockers Menzingers blew everyone away with their set. I mean, have you ever seen a bad Menzingers set? Yeah, neither have we.

Meanwhile on the main stage, four boys from Baltimore brought it all to a spectacular close with a headline set that’s fit for festivals. All Time Low have been keeping a low profile this year while working on other projects such as Alex Gaskarth’s new supergroup Simple Creatures. The band have also been busy working on new songs, premiering new track Getaway Green at Leeds just the day before with fans knowing the lyrics to the entire song just a day after. Celebrating ten years of the release of their sophomore record Nothing Personal, an All Time Low Show wouldn’t be complete without on stage banter between Alex and Jack. Whether that’s with the crowd or by giving drummer Rian Dawson a hard time for messing up the finish to Lost In Stereo.

Finishing off a stellar set with their signature track Dear Maria (Count Me In), All Time Low left us all with happy, smiling faces and of course, the need for a UK tour.

Another one for the books but most importantly Slam Dunk 2019 once again gave a platform to celebrate the immense talent alternative music currently has to offer.