Independence is a state of mind. Recent events have proved as much. In the case of Hassle Records it is also a reality. Taking inspiration from independent labels such as Rough Trade and Sub Pop, Hassle itself was set-up 15 years ago on the simple premise of providing artists with a platform by which they could truly express themselves on their own terms. So today, Hassle Records is one of the UK’s most prolific independent labels. 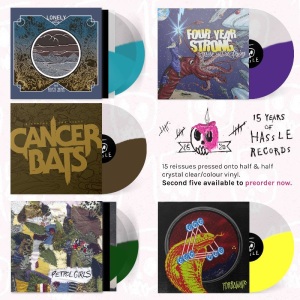 This year, Hassle celebrates its 15th anniversary, it does so in good health and with a project that is simply titled 15 X 15 – a series of special editions of 15 key releases that have shaped the label’s existence. Issued in three batches of five, every release will be fittingly issued on crystal coloured vinyl & released 30 October 2020.

“2020 marks 15 years of Hassle Records. So, we wanted to celebrate. It only seems like yesterday that we had to change the label’s name (for bullshit legal reasons) and start again. But we got off to a great start putting out the Juliette Lewis EP ‘…Like A Bolt Of Lightning ‘ as the first release. And it’s been a great musical journey ever since. Never wanting be constrained by a ‘genre sound’, we work with artists and music that we simply love, and from there we just hope that other people will also love the records that we put out. This ethos has been the ultimate foundation in the label’s history from the start.

To that end, for our 15th anniversary we have decided to re-issue 15 records from varying parts of our history and catalogue, all as limited vinyl-only releases. Hopefully our choices accurately represent what a diverse sound we have to the label, and that the passion we have for the music and the bands shines through.” says Wez (co-owner).