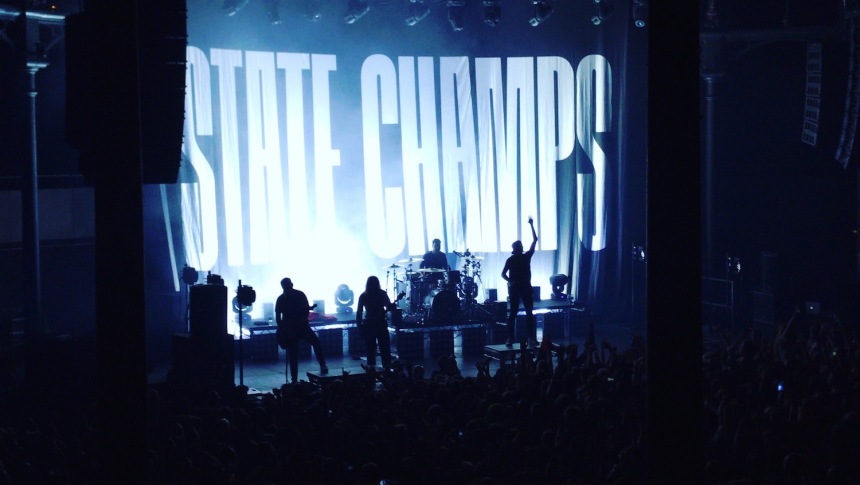 It’s their biggest headline show to date – and boy did they do it justice.

Having released their incredibly addictive new record Living Proof earlier this year, it was finally time for State Champs to bring their anthemic pop-punk to our shores. We saw them play at Slam Dunk Festival, and many other times before, but this show at London’s Roundhouse was not only the band’s biggest show to date but also the best one we’ve seen them play. In fact, one of the best shows we’ve seen this year.

With support from Woes, Stand Atlantic and Seaway, it was a delightful pop-punk extravaganza worthy of an epic Saturday night. State Champs kicked their set off with recent single and unlawfully catchy tune Criminal. Quite honestly, if Living Proof is what happens when you get State Champs, Mark Hoppus and Alex Gaskarth writing songs together, then we are 100% here for all of it.

There wasn’t a single track off of the new record that didn’t sound anthemic and proved that these guys are destined for even bigger things. Two of our favorites of the night were by far Mine Is Gold (mainly because we can’t stop listening to it, ever) and Our Time To Go which gave us all the feels, and quite honestly we just want to go back to those four minutes at the Roundhouse when everyone was singing along to every word, thank you very much.

But this isn’t where the highlights end. For If I’m Lucky, off of the band’s 2014 EP The Acoustic Things Derek Discanio sends the rest of the gang off stage and grabs his acoustic guitar for a truly stunning performance. “Is it anyone’s first time seeing State Champs tonight? Welcome to the family.” Derek addresses the crowd. And as if your emotions weren’t all laid bare already, State Champs belt out  Safe Haven.

There’s also plenty of tracks to dance and mosh and crowd surf to including All You Are Is History and Easy Enough. State Champs’ very first headline show in London was at the ca. 150-cap Old Blue Last just four years ago, and now they’re playing one of London’s most iconic venue with an added 1,500 to teh capacity and you’ve got the band’s biggest ever show, right here in the UK’s capital.

They finish off their main set with the epic lead single off their new record, Dead And Gone before treating us to Elevated and Secrets in the encore. There’s pyros, there’s singing along and we’re pretty sure there’s a few tears of joy around the room.

To sum it up – we’d like to live in this State Champs gig forever. Can someone make that happen? Kthanksbye.

One year ago: Last gig before Covid hit - @themenzingers at @o2forumktown 🖤
#throwback to a year ago - the second to last show we’ve seen before the world went tits up ♥️ the incredibly fun @bfs_official at @o2academybrix with support from @noturgirlfrenz and @simpleplan
I feel attacked 👀 Happy Valentine’s Day y’all ♥️
Roses are red, violets are blue, @downloadfest, I really miss you 🖤
I need a song to kill this headache, I need a beat to feed my soul, I need the sound of a thousand voices, singing back to feel at home 💚🖤
There’s a story at the bottom of this bottle but unfortunately the pubs are closed 😩
Loading Comments...
Comment
×
%d bloggers like this: