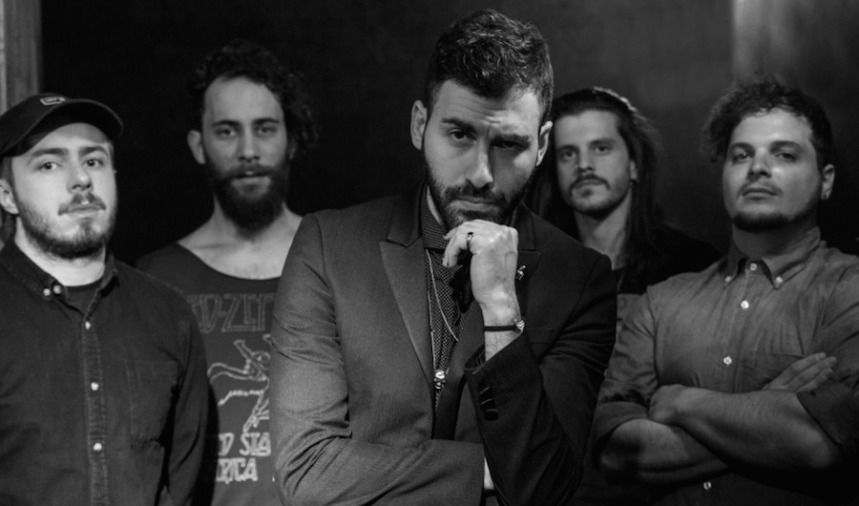 Just ahead of the release of their new EP, 7he 7ouch talked to us about writing those songs and more.

The band’s recent single You Can follows the debut single Solution, the first track taken from the new EP Seventy Seven. Racing with energy and unmissable hooks, the track was inspired by the political turmoil affecting us across the globe and the extreme ideologies people have on how to deal with the issues.

The band, formed of Constantine (vocals), Stelios (guitar), John (lead guitar), Toni (bass) and Dave (drums), recorded Seventyseven between studios in Athens and London which consists of six explosive tracks, written and performed from their hearts.

With each member bringing influences ranging from old school rock’n’roll through to nu metal, they’ve created a record which pays homage to the past, with huge guitar solos and memorable melodies, whilst ferociously tearing into tomorrow with attitude and force.

So we sat down with the band and talked about their new EP, life on the road and their dream festival line up.

How did you guys get into music in the first place?
I think it was middle school, me and Stelios were in different schools but had some friends in common. We started jamming after seeing one of the school bands playing at a ceremony and we were like, “oh this is cool, we should try this”. At the time, John and Toni were in living in a different part of the country and during their skating years, and after listening to a lot of the 80’s glam and AC/DC, started a band together too. Soon after, we met John at a rehearsal while he was studying in Athens and at that time we had to part ways with our first guitar player, so this is how the two bands first got connected. Dave was always a musical spirit, he studied and went to a musical school and was playing in bands since high school. We met him after we moved to London and he joined us as drummer.

Let’s talk about your new EP – what can fans expect from it?
We are very excited about it. Expect to listen to a rock band that uses real instruments with a guitar element that is very present in our sound. It‘s melodic where it needs to be and heavy where the songs are asking for it.

Where do you take inspiration for your lyrics from?
It could be a lot of things. Sometimes I like being ambiguous so every listener could relate to it in their different way. Other times it could be something personal. A lot of the lyrical content is a reaction to the music while we are jamming too.

If you had to describe your sound in 3 words, what would they be?
Wild. Classy. Sexy.

How would you describe your songwriting process? Do you have any rituals?
We are performing a blood ritual every time we are going to rehearsal. We bring together a Katana sword that we own and we cut ourselves right at the palms, we unite our hands and making a circle while reading the holy bible in reverse. Of course I am joking. Nah no rituals in the mix. It all has to do with timing and feeling inspired. It could be a month without anything new and then right after that we can come up with like 10 new songs in two weeks.

What would your dream festival line-up be, including yourselves playing?
Ozzy Osbourne, System Of A Down, Foo Fighters, The Killers, Deftones, Shinedown, 7HE 7OUCH and Nickelback opening for us.

Stories from the road – what’s the funniest thing that ever happened to you on tour or at a show?
There was this show somewhere in East London a couple of years ago and while we were performing there were some kind of tipsy ladies on the front row and all of a sudden they started taking their bras off and throwing them to us on stage. The stage was very close to the audience the club was a 300 cap. Funny thing is that most of them were there with their boyfriends and they weren’t looking very happy with what had just happened. After the song finished I looked down and there were more than 10 bras in various colours on stage with us.

What was the first album you ever owned?
First album ever EVER owned was an Iron Maiden collector’s edition of Out Of The Silent Planet.
I didn’t know anything about the band. I was 11 years old. I just saw Eddie on the cover and I bought it right on the spot.