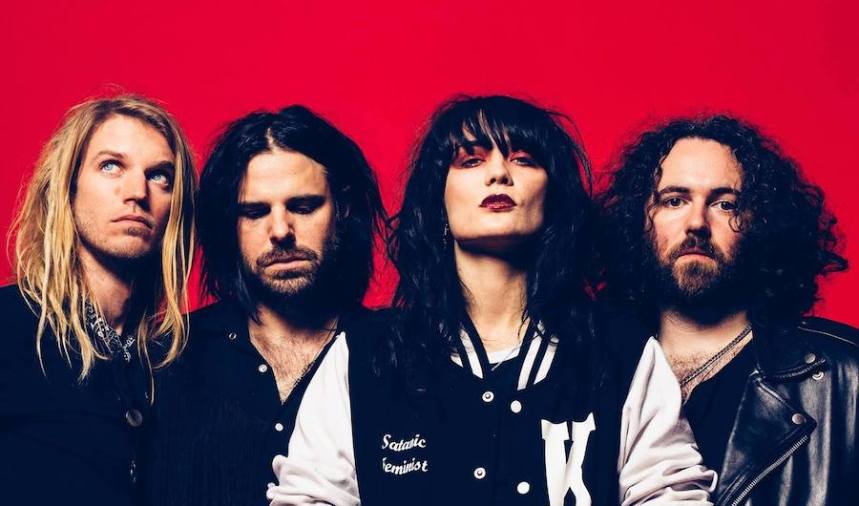 The band have also announced a UK headline tour for October.

British garage-rock four piece Saint Agnes have today released the striking visuals for new single Welcome To Silvertown, the title track of their debut album out 3 May via Death Or Glory Gang Records. Alongside the video, the group have also announced an October UK headline tour.

Kicking off at Jimmy’s in Manchester on 16 October, the group will make their way across the nation, stopping in Glasgow, Edinburgh, Liverpool, Sheffield and London, for a show at Dingwalls 24 October for their largest headline show in the city to date.

Shot in black and white, the cinematic visuals manage to capture the intensity and rebelliousness on the single’s themes of escapism and energy that might be depicted in a classic Western film. Throughout the video, the band are seen dressed as dubious characters that might be expected in the merciless backwaters of Silvertown.

Speaking of the video, the band comment; “Silvertown is both the name of where the band began, from Kitty’s flat there, as well as the name for the fictional place where the stories we tell on the album take place. The songs are a collection of stories from our reality but dramatised through an exaggerated lens; people we met became gods or devils, gunslinging heroes and villains in the songs. The characters we portray in the video are exaggerations of our true selves. Welcome to Silvertown, drive like hell”.

Self-produced, and engineered by Luke Oldfield (The Wytches, Uncle Acid & The Deadbeats), Saint Agnes’ debut album captures true rebel heart and energy. Musically unshackled and ferocious in its intensity, Welcome To Silvertown fuses menacing, frenzied rock with dark anthemic flare. Born in a dingy sub-zero flat, the album is rife with themes of wild fantasy, escapism, emotional fragility and the inside-outs of living in East London’s district of Silvertown. Now in 2019, the gates of Saint Agnes’s quasi-fictional sin city are flung open.

Consisting of Kitty Austen (Vocals/Guitar/Keys), Jon James Tufnell (Vocals/Guitar), Ben Chernett (Bass) and Andy Head (Drums) – Saint Agnes have clocked up over 200 shows across the UK & Europe already. 2018 laid the foundations for what is set to be a breakout year for the band, playing the mainstage at Kendal Calling, receiving radio support from Tom Robinson (BBC 6 Music) and John Kennedy (Radio X), as well as festival appearances across Europe and sold out headline shows at The Lexington, and Borderline in London.